Are you certain you wish to keep poking at this wounded land?” – Suria Argona

I’m quite fascinated with bureaucracy, especially bureaucracy that allows for totally arbitrary decisions by the powers that be. The Explorer’s License is a perfect example of this. On paper it looks to be a simple fee structure to limit the amount of wear and tear on the forest from wagons, woodcutting, and harvesting. In reality it’s a way for the Queen’s Legation to evaluate who’s too incompetent to go into the forest (and thus needs to pre-pay their rescue, funeral, and diplomatic incident expenses), and who’s too capable to let go without wringing them for extra payments.

When the legate saddles an expedition team with a heavy fee (or pre-emptive fine) the group has a few options. They can pay up of course, if they have the money to spare and believe that the location will make them wealthy beyond having to care about a few dozen thaler extra in expenses. They can seek (additional) sponsorship from the factions and wealthy parties of the Hold. They can sell information to the Legation Archive (see below). Or they can do a favor for the legate.

In fact, if a capable team is laden with a large arbitrary fee, one can safely assume that Suria Argona has a task in mind for them already. One such task is given below. It is one I ran for my players when they were arranging their own expedition out into the wilds. 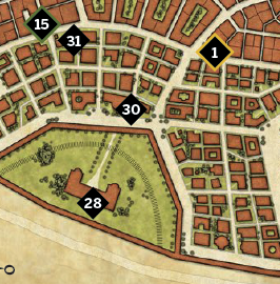 The Queen’s Legation is housed in a grand two story building right outside the gates of Nighthome. The western wing includes lodgings and on the second floor is a majestic hall where the father of the Legate tends to hold court, surrounded by town dignitaries or visiting nobles. The building’s core and southern wing hold its public spaces with reception, offices, meeting rooms and an archive. The latter is placed furthest south, on the ground floor and down in the basement.

Selling information to the Legation Archive

Karasto is an educated Wizard and will burn sticks of incense during the account to “record” the story for a reading with the ritual Tale of Ashes (ashes are stored in a small box together with the record). He can also use Telepathic Interrogation to test the truthfulness of his witness.

Perela is an educated Theurg and can use Judging Bonds and Command Confession to extract a truthful account. She also has the ability Witchsight and will use this to determine whether someone has been touched by the darkness and whether they are being deceitful.

For especially important interrogations, the two will cooperate to extract the truth from a witness. 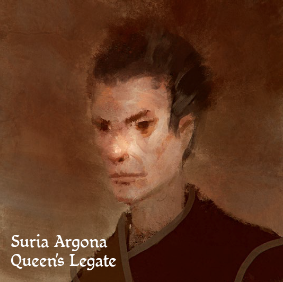 Faced with a seemingly capable party, Suria Argona will dump a hefty “Other” fee on the group’s license and offer to slash it if they are willing to carry out a service for the Queen.

There is an agent of certain seditious parties who needs to be brought in for questioning. He goes by the name Odelar and typically surrounds himself with a number of ruffians and sellswords when he travels. His connections prevent the city watch from officially arresting him, but if he is apprehended by… ‘parties unknown’, and secretly brought to the Queen’s Legation, Korinthia – and House Argona – would be most appreciative.

During the day, Odelar can usually be found within the Hold – often seeking meetings with nobles and other influential figures. The rest of his time in the days he usually spends at the tavern Afadir’s Triumph, enjoying imitations of classic Alberetorian food.

During the evenings, Odelar travels south of the Hold to visit the unseemly campground Blackmoor. There he is known to frequent the… ‘pavilions of joy’ called the Lindworm’s Nest – operated by one Mistress Belina.

Once he is caught, the party is to deliver Odelar – ALIVE – to members of the city watch waiting outside the Hold’s palisade. Return to the Legation the next day.

He actually works for Suria Argona’s father, Count Alkantor. He supplies the old count with women through a secret passage that leads from Afadir’s Triumph to the Queen’s Legation.

Alkantor is mostly aligned with Mayor Nightpitch, which puts him at odds with his daughter who is working with the Queen to depose the mayor to take direct control of Thistle Hold.

Suria is well aware of Odelar being in her father’s employ, and also knows that the man tends to babble to his favourite prostitute in Blackmoor, and in Suria’s eyes it’s not entirely impossible that the man really is a subversive agent trying to undermine her family’s authority.

Suria doesn’t actually care if Odelar lives or dies, but she would prefer to have him interrogated so that his full service to her father, as well as any other affiliations can be laid bare.

Odelar himself is very self-confident. He is quite comfortable in his current employment, enjoying a stipend of ten thaler per day in Alkantor’s service, on top of a sizable inheritance from his late father who ran a successful caravan business in the early days of the migration across the Titans.

Odelar is a hopeless romantic. He has fallen in love with a prostitute named Agatra/Agatro at the Lindworm’s Nest in Blackmoor. He has an unfortunate tendency to confide in them, and brings them lavish gifts.

Odelar employs a number of goons to escort him around. The actual number depends on his business on a given day. When on ‘business’ in Blackmoor he usually surrounds himself with five or more sell-swords. His personal bodyguard is an ogre named Tearer (or Terror, to some).

Odelar has stats as a Robber Chief.

Terror has stats as a Plunderer. 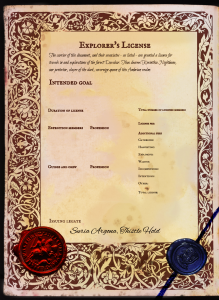 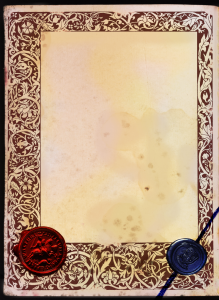 Guide to fill in the license

One Reply to “A Legate’s Favor: Explorer’s License as an Adventure in Itself”